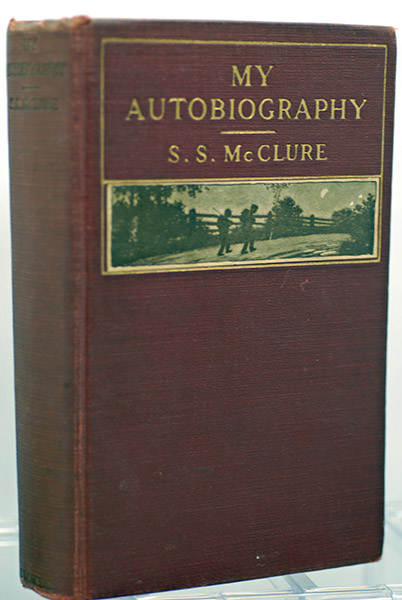 Ghst written by Willa Cather. From the recently auctioned collection of M.B. Goldstone--with his personalized gold bookplate lightly attached to the front pastedown and his penciled signature and notes to the front free endpaper. This copy originally belonged to author, novelist, and short story writer Katherine Havilland Taylor--and attached (tipped in) is a rejection letter from S.S. McClure for a short story Taylor wrote called "How Fickle Women Are". Dated June 8, 1925, and on McClure's Magazine stationary, McClure writes to Taylor--"This is a very good story and I would like it but I am sorry to say I can't buy it, considering what I have on hand." "Faithfully Yours. S. S. McClure". Taylor was a successful short story writer who was published in several magazines, but apparently, never in McClure's. Taylor wrote one novel called "The Failure", which was adapted into a 1938 RKO film with a renamed title of "A Man To Remember"--starring Lionel Barrymore. Taylor had several stories published by all of the major writing magazines of the early part of the 20th Century. Also, enclosed and attached to this copy on page 241, conveniently across from the photo of "Viola Roseboro"--editor in chief of McClure's magazine, is a letter on McClure's Magazine stationary dated December 21, 1922 and also addressed to Taylor, is a rejection letter for a story entitled "Facing Reality" and signed and written by Viola Roseboro with her handwritten notes to Taylor on one side and a formal rejection on the other. In her notes Roseboro says, "Good, only we feel it is more for the women's magazines--not for us. Good Luck, and I expect as much. V. R." The other side of the letter states, "We always thank you for letting us see your work. We must send this back despite much wit and cleverness.....I am going to take the liberty of telling you that I think this would be better told without the frills and trimmings the author addresses to the reader--better and more saleable". Roseboro goes on to state that the reason she never signs her letters is because she is seldom in the office--apparently Taylor questioned if they (the stories) were ever indeed read at all because she was rejected so many times. It is common knowledge that Roseboro really called the shots at McClure's---she was responsible for getting on board many young and talented writers--including Jack London, Upton Sinclair, Rudyard Kipling, Robert Louis Stevenson, Sir Arthur Conan Doyle and Willa Cather---who secretly penned this autobiography of McClure's life. McClure lived until 1949, and among many accomplishments, he was a business partner of Frank Nelson Doubleday, founded with him Doubleday & McClure, which became today's Doubleday publishing empire. This copy is in very good condition. First printing with September 1914, as called for. Frontispiece portrait of McClure with original tissue guard as new. Dustiness to the page ends, age toning to the spine with the lettering being quite hard to read. The front hinge is loose but easily repaired. Interior pages are unmarked and clean. Front board is quite nice with gilt lettering and decorations bright. Altogether a nice well read copy from the collection of a quite famous collector, who along with his brother Adrian Goldstone, Steinbeck's bibliographer, both well known and whose books are just now being auctioned off for record sums--(Gatsby for $180,000). What makes this copy rare are the letters and signatures of McClure and Roseboro--indeed Roseboro's signature is very rare for somebody whose influence was huge in the publishing world of the early 20th Century--she single handedly put Jack London's career on the inside track, and he went on to become the highest paid author of his time. Additional pics listed on Biblio.com or via email. Send requests to [email protected]